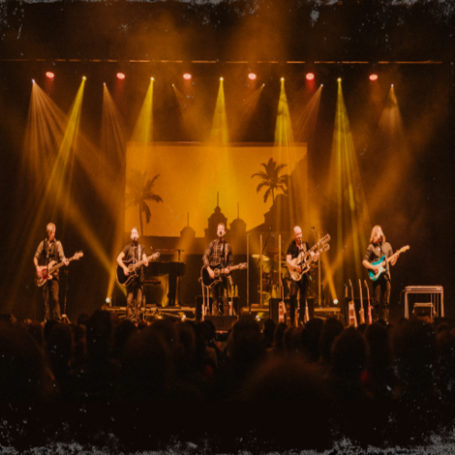 Fresh from their hugely successful international tour including shows in Europe, Australia and New Zealand, ‘The World’s greatest Eagles Show’ return once again to celebrate their incredible 10th Anniversary, performing their legendary hits and newer favourites.

No show in the world recreates the American Legend’s music with such accuracy and reverence as the Ultimate Eagles. Their global demand and over 20,000,000 online media views stands as a testimony to their international popularity and has earned them world wide acclaim. They have been hailed as “The Next Best Thing to The Eagles” and “The World’s Greatest Eagles Show.”

Performing live rarities and best selling classics, the show delivers the Ultimate in live Eagles experiences, presented by world class musicians who have spent entire careers at the highest levels. In the past members have shared festival stages and appeared alongside artists such as Queen, Iron Maiden, Status Quo, Journey, Van Morrison, The Royal Philharmonic Orchestra, Stevie Wonder, Paul McCartney, Ringo Starr, Cliff Richard, John Legend and of course, the Eagles themselves.

“The Next Best Thing to The Eagles!” - 2GB Radio, Sydney, Australia

“The Greatest Eagles Show in the World” - Chris Evans BBCR 2

“Sensational!... Not a tribute band, these are real musicians with real talent